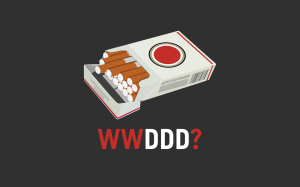 It’s been a while since I ran my own blog. About six years in fact, so I thought it was about time I started a new one. Although I’ve posted on other blogs fairly regularly I haven’t had my own since I took a year out to go travelling in 2006 and used a blogger account to keep up to date with friends and family.

A lot has changed since then but I think the time felt right to go back to blogs after lots of personal and professional work with social media.

Turns out the hardest thing about starting a wordpress blog is thinking of a snappy name – it must be a bit like starting a new town centre hairdressers when all the best puns like Hair Flicks, Headlines and curl up and die (all genuine NE outlets) have already been used.

So, with a total lack of originality I’ve gone with a Mad Men quote. Partly, because I sit in my own ‘period piece’, Don Draper-style office that hasn’t been redecorated since the late 1960s and partly because it’s just a damn fine show.

The line comes from copywriter Fred Rumson as he breakfasts on a vodka and orange before another day at the era-defining Sterling Cooper:

Vodka is poured into a high ball glass full of orange juice.

Fred sticks his letter opener in his glass of “orange juice”like a swizzle stick.

Salvatore: Should we wait for you to have your breakfast?

Fred: A day without orange juice is a helluva long day. Freddy leans down and takes a sip from the full glass, his arms extended at his sides. Fred: Look Ma, no hands.

So that seemed as good a name as any and adaywithoutoj.com was born.

One thought on “What’s in a name?”