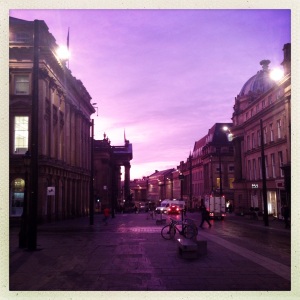 What started out as a germ of an idea with a couple of my contacts on Twitter has grown into a broad series of posts about the North East PR and communications scene.

What came out of a few light hearted and sometimes tongue-in-cheek questions was a really positive picture of a region that’s getting its mojo back after some extremely tough years.

Austerity and downturn has hit us harder than most other places, but these blogs speak to me about an area full of confidence, humour, defiance, innovation, hard graft, excitement and crucially a desire to roll up sleeves get things done.

I was also so impressed (but not surprised) at the willingness of PR professionals in these parts to share their ideas so readily so that others can learn from them. Make no mistake – I’ve learned loads from looking at these posts and would say they make some essential reading for anyone looking to break into the profession.

I’d like to say a massive thank you to everyone who contributed.

One of my least favourite newspapers caused controversy earlier this year with a pretty shabbily informed article comparing the North East to the run down US city of Detroit. It implied a sense of hopelessness and self pity, well if you work in comms take a look at some of these and see if it changes your mind……

#2 “Lethargy is something that concerns me” Sarah Hall

#4 “austerity has seen PR come into its own” Gill Stephenson

#9 “Reputation is everything” Helen Fusell

#11 “You cannot ride every horse yourself” Huw Lewis

2 thoughts on “The NE comms conversation: 15 reasons to work in communications”