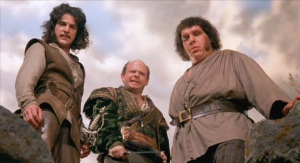 This week it’s the turn of Julian Christoper, a giant of the North East PR scene in every sense of the word, to join the conversation.

In an opus that takes us from 1992 to the present day Julian casts his cultured and experienced eye over the current state of the North East comms scene. He also gave me the perfect excuse to misquote the Princess Bride….”Life is pain. Anyone who says differently is selling something…….”

What made you get into the PR/comms business?

Graduating in 1992, in the aftermath of the recession before last, there weren’t many jobs about.  I had an idea I wanted to work with words in some way or other, and after a year of applying for hundreds of vacancies, I got offered two jobs at the same time, one in publishing in London and one in PR in Nottingham.  I thought PR would offer the better career options, so chose to head to the Midlands – seems to be working out OK so far.

How have things changed in the last 5 years?

Pretty much beyond all recognition on the surface, but there remains a lot of consistency underneath – finding the most appropriate ways to tell good stories with given commercial and comms goals in mind remains paramount, regardless of the range of channels through which you can now do this.

Are you optimistic about the future?

I think the threats and opportunities for comms professionals are equally manifold, but I’d definitely lean towards a glass half full view of the future. There are more ways to tell better stories in more detail than ever before, and there are sure to be even more around the corner –  the challenge for us is to grab and make the most of them

What single bit of advice would you give graduates just entering the business?

Be both interesting and interested.  When I was recruiting junior staff in previous roles, I’d always look at the person ahead of the qualifications – what have you done so far, and what is it about your personality that makes you stand out?  You’ll also need to be able to show the same level of interest and engagement about all your clients, not just the ones that particularly appeal to you, so be ready to cultivate ways of sniffing out what’s interesting about whatever comes your way.

Are disciplines like PR, marketing and advertising becoming the same thing?

There are increasing areas of commonality being created by the new communications channels that have popped up in recent years – all the marketing disciplines can rightfully make a call on them, and coordinating what each party wants to do, and why, and when, can make the whole greater than the sum of the parts.

What are the key traits people in PR need to succeed?

Is the industry becoming more or less fragmented?

In the North East, I think the fragmentation’s settled down a bit of late as we’ve matured.  When I moved here 15 years ago, the scene was dominated by a few larger agencies that didn’t really like each other very much.  Over time, lots of these agencies shrunk or broke up, with lots of independent practitioners and smaller shops springing out of them.  The fact that lots of us have worked together over the years makes the PR community a lot more friendly and cooperative these days, which is good news from a professionalism point of view.

For you, what’s the real benefit of good PR/comms?

There are any number of benefits, but everything has to start with how PR activity can support a client’s commercial and operational objectives – enhancing the ways in which these are being addressed demonstrates the value practitioners can add to a given business, tells the full story of what it does and how it does it, builds/shapes reputation, creates greater understanding etc etc

What advice would you give the younger you?

Worry less, travel more, make as much as you can of the relative oceans of spare time you currently have and start running well before you’re 40!

What do you see as the most important issues in PR right now?

Being a fairly serious-minded chap, I’ve never liked the fluffy, disposable image that PR can sometimes get tarnished with.   I think we’ve won more boardroom respect in recent years for the impact that strategic comms can have on commercial objectives, but we’ve still a way to go to be properly established as a ‘profession’ (as I believe we are) alongside the usual prof services suspects

What worries you about the industry?

That we’re dismissed or undervalued as just ‘the guys who get stuff in the paper’ – we are, can and should be a lot more than that.

What ‘s the best thing about living/working in the North East?

The space – growing up by the sea, I’ve always loved big skies, and even though I’m now about as far as you can get from the English coast, there’s no sense of claustrophobia here, even in our main cities.

What are the key issues facing the North East right now?

Finding more ways to fight our economic corner without sounding, as I think we too often do, like we have an enormous chip on our collective shoulder.  The region has become markedly less insular in the time I’ve been here, and gets more respect for being so, and we’ve got a great deal of positive things to shout about.

What keeps you up at night?

Now my kids are all that bit older, generally (finally!) it’s not them.  Work is probably the answer, as I’m a bit of a night owl, so don’t mind popping back up to the desk once everyone else is asleep for another hour or two.

Cinema Paradiso is the arty answer, but The Princess Bride is the one I’d choose to have on loop at my desert island cinema – wonderfully warm, thrilling and witty, every home should have a copy.
Who will play you when they get round to making the biopic of your life?

You mean you missed it?  I thought Leo was very good, if a bit short